Use Of Quantum Technology In Cybersecurity

Quantum computing marks a new generation that will potentially revolutionize cybersecurity. The advancement in technology will possibly render the existing methods of encryption outdated. For this reason, data will be exposed or left open to interception awaiting improved methods of decryption to be developed. Hence, future data security is dependent on quantum key distribution.

Quantum key distribution maintains secure communication through use of quantum mechanics. This approach allows for production of a random secret key that is shared by two parties only known to them. Thereafter, messages between the two users can be converted and deciphered using that random secret key.

The law of mechanics forms a tool used by quantum key distribution to protect an encryption key shared between authenticated users. The key is denoted as a dual bit sequence, which becomes incoherent when combined with sensitive data. Since the key is random and secure, an eavesdropper is unable to obtain data from it when they steal encrypted data. Moreover, quantum particles comprising single photons of light act as data carriers forming the encryption key. These quantum particles will then behave in a manner that privatizes data.

Mayur Rele : Any attempt to compute or copy the information that the quantum particle carries before the recipient gets it indicates a high error rate to the authenticated users during transmission. In case of such notification, the users can do away with the key and start the process all over again. There is no harm discarding the intercepted key since it is not used to encrypt sensitive data. 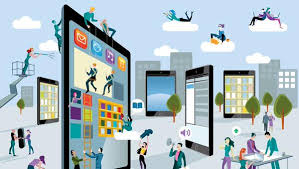 Conclusively, quantum technology denotes a paradigm move in computation. We look forward to a fascinating future of technology surfaced by quantum computers. Quantum computing is a game- changer for cybersecurity as it offers a faster way of protecting data. This technology has the potential to revolutionize computation by enabling specific kinds of typically difficult problems to be solved. This promises a great future of technology where data security will be more enhanced.

MayurRelehttp://mayurrele.org
Mayur Rele,cyber security expert and cloud automation leader from New Jersey, USA, has extensive experience in overseeing global technology, security and cloud infrastructure in healthcare, e-commerce and technology companies.
Previous articleCube Boxes is so Famous, But Why
Next articleThings to Remember While Dealing with Makler Ulm

Flutter vs React Native in 2022: Which One is Better for Your Business?

Flutter vs React Native: The productivity and feature set of your future application are determined by the framework you choose. A poorly built app...
Read more
Business

Why Choose Magento for an eCommerce Store in 2022?

Laravel vs WordPress – Which Will Be Your Best Pick in 2022

Whatever technology you are using, your ultimate aim as a website or software developer is to deliver the bespoke solution to your client. Isn't...
Read more

Flutter vs React Native in 2022: Which One is Better for Your Business?

Flutter vs React Native: The productivity and feature set of your future application are determined by the framework you choose. A poorly built app...
Read more

Presently, any brand's success centers more on its packaging than any other component. What has brought about this change? Box manufacturers offering a revolutionized...
Read more

Marketing in the Age of Pandemic (Infographic)

The onset of the COVID-19 pandemic had the world at a standstill, affecting around 6.2 million people across 210 countries. Aside from serious health...
Read more

When you are listening to the word debt recovery by professionals, the first reaction that you will give out is a glance of nervousness,...
Read more

Look Your Best with These Great Beauty Tips

ABOUT US
At Daily dialers, we encourage and provide a platform for writers of all types and niches to operate on every level you can think of. This earns us the number one source of reliable information Read More
FOLLOW US
© Copyright 2022 Daily Dialers