The reason why Corn and Soybean prices have risen in 2022

Corns and soybeans are farm products taken as food or used as raw materials. In most countries, corn and soybean productions generate money for them.

Nations that produce them in abundance noted significant growths in their Gross Domestic Products.

Therefore, if these countries stop producing these crops, or reduce the quantity of production, it’ll affect their economies. In addition, if they produce enough, but there are little or no buyers, the crops will go to waste. These countries will lose money. Additionally, they would have wasted manpower, resources, and time spent on cultivating these crops. Fortunately, countries that produce soybean and corn have made profits for some time.

However, things have begun to change because of Covid19 and the ongoing war between Ukraine and Russia. Covid19 has contributed to the unstable prices of soybean and corn.

That is why agricultural products trading specialist, Roman Dawidowicz cautions commodity traders. He also advises investors to invest in U.S. commodities because of the increase in demand for U.S. crops. Roman Zenon Dawidowicz has adequate experience in trading on a global level, so he knows what he’s talking about.

Soybean and Corn Prices in Some Countries

In Singapore, corn prices increased around the 1st of March 2022. But many are concerned about trade interruption in the Black-Sea area as a result of the Russian-Ukrainian war. Consequently, it has affected the corn price in the country. This is also the same for soybean, whose prices rose a bit and then fell.

The decision has affected the demand, supply, and costs of soybean and corn in Australia.

Egypt is not left out because Ukraine supplies commodities to Egypt. The war has prompted Egypt to suspend commodities(soybean and corn inclusive) purchases from Ukraine. The suspension has disrupted the Egyptian agricultural market.

The Chinese agricultural sector is expected to import thousands of soybeans from the U.S. in 2022.

Understandably, the U.S will not be affected much by the Ukrainian – Russian war.

Moreover, soybean and corn were sold at a normal rate last year. The investment value of these crops also increased simultaneously. This happened because more countries started buying from the U.S. when Black-Sea trading was disrupted. Lack of rain in these regions affected their agricultural sector. This made them import foreign crops from countries like the U.S.

Thus, the demand for U.S. crops has increased, so also is the cost of selling them. Likewise, the U.S agricultural sector has seen a boost for the past six months.

Agricultural experts hope that the agricultural sector will improve more and remain stable till 2023. They are hopeful more farmers will produce more crops provided the government provides all necessary resources.

Effects of Russian – Ukrainian war on Soybean and Corn Prices

Russia and Ukraine are large exporters of agricultural products globally. They export wheat, corn, oilseeds, soybean, and many more to foreign nations.

The ongoing war in Ukraine has put a stop to the manufacture, sale, and exportation of all products.

The number of traders that turned up for the 2022 trading tender was too low. One main reason is the disruption in the supply chain of commodities from Ukraine and Russia.

Western countries have sanctioned Russia for their actions, hence, many countries stopped buying Russian commodities. Countries that buy these commodities can’t turn to Ukraine because Ukraine is now a war zone. Ukraine can’t sell anything right now because it needs to survive the war.

In addition, Ukrainian infrastructures were damaged by the airstrikes.

Therefore, buying and selling in the Black-Sea region has been stopped temporarily until the crisis is resolved.

The ongoing Russian and Ukrainian crises made it clear that there will not be summer farming in Ukraine. Before the war started, Ukrainian farmers planted crops in the summer and spring seasons. They plant corn in April so that the crops can grow during the rainy season. Unfortunately, this will not happen this year because Ukrainian citizens are fighting for their lives. The absence of Ukrainian crop produce will reduce the global market value.

Similarly, the inflow of agricultural produce to Europe and other continents will reduce.

Roman Dawidowicz advises nations that need soybean and corn to find alternative means. The reason is that it is uncertain when the Ukrainian – Russian war will end. Countries that need these commodities can’t afford to wait for the end of the war. If they do so, their economies will be affected. 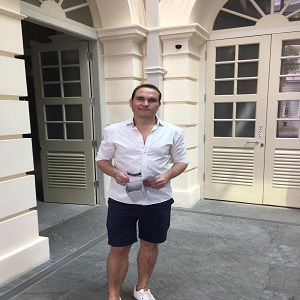 romanzenondawidowiczhttps://e27.co/user/romanzenondawidowicz
Roman Zenon Dawidowicz is an Intermediate Mandarin speaker with Taiwanese qualifications and over 12 years of experience in the grain and oilseeds physical markets in a global origin/destination. Looking for business, procurement and business development, job opportunities within Switzerland, Dubai and Asia.
Previous articleYour Sales Methodologies Should Focus on Widening the Gap
Next articleiPhone XR Overview: Is It Still Worth Buying in 2022?